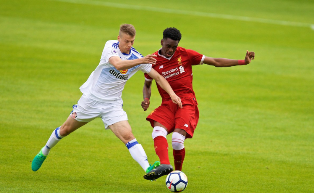 Former Golden Eaglets trainee Ovie Ejaria was brought into the Reds squad to enable him get game time ahead of the League Cup fixtures where he's expected to figure for the first team.

He played a part in the second goal scored by Liverpool, supplying the pass to Brewster, who fired the ball beyond goalkeeper Stryjek in the 82nd minute.

The match remained goalless until the 78th minute when Whelan hit the crossbar and Virtue-Thick profited from the rebound.

Ejaria was booked with four minutes remaining, before Virtue-Thick added more gloss to the scoreline on 87 minutes after combining with Brewster.