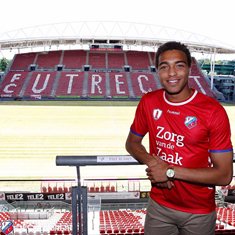 Rumored Nigeria Football Federation target Cyriel Dessers continued his remarkable start to the season after scoring in FC Utrecht's 2-0 win over Willem II at the Stadion Galgenwaard on Sunday afternoon.

The Belgian-born striker doubled the home team's advantage in the seventh minute after he was fed by Görtler .

Dessers has now contributed to 47 goals (33 goals, 14 assists) cumulatively in his last 46 matches in all competitions for NAC Breda and FC Utrecht.

It is still early days in the Dutch Eredivisie but the 22-year-old is topping the goalscoring charts, with 3 goals in his first 2 games.