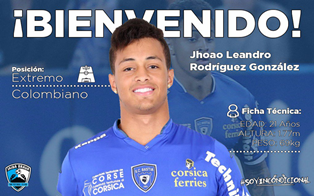 The Mexican second-tier club were able to complete the transfer of Joao Rodríguez before the transfer window closed for business in the country on September 5.

The 21-year-old Rodríguez officially arrived Chelsea during the 2013-2014 season and was offered a contract after impressing the coaching staff during trials.

He is the first Colombian player to be on the books of the Stamford Bridge outfit, ahead of Monaco striker Radamel Falcao, who spent the 2015-2016 season on loan at the club.

As a result of Rodríguez's failure to be issued a work permit, he has been loaned out to Deportes Quindío, Uniautónoma, Bastia, Vitória, Sint-Truiden, Santa Fe, and Cortuluá in the last four years.

He represented the Colombia U15 and U17 national teams before appearing for their U20 squad.