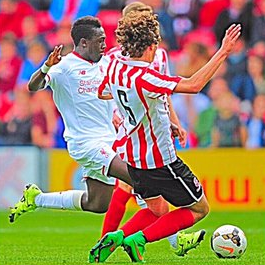 Two players of Nigerian descent featured, with Bobby Adekanye (Liverpool) and Tom Dele-Bahiru (Manchester City) coming off the bench for their respective teams in the second half.

The game remained deadlocked until the 89th minute, when England youth international of Indian descent Yan Dhanda scored a cracker after cutting in from the left.

Adekanye, who had made a run into the box, had called for the ball but instead Dhanda elected to curl the ball home.

The 18-year-old Netherlands youth international spent ten minutes on the pitch in his maiden appearance in Premier League 2, while Dele-Bashiru was introduced in the 46th minute and was yellow carded in the third minute of stoppage time.

The versatile winger is in the final year of his contract with Liverpool, whom he joined in 2015 from Barcelona.

England U20 World Cup star Ovie Ejaria would have played his third game in PL 2 if he was included in Neil Critchley's line-up.