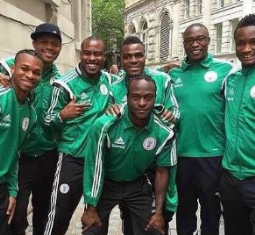 Super Eagles attacking midfielder Joel Obi faces a spell on the sidelines after picking up an injury in the Serie A clash between Torino and Benevento on Sunday.

The former Inter Milan wonderkid had to be replaced by Ghana international Afriyie Acquah in the tenth minute after signalling to the bench to be substituted.

Obi tried to play through the pain barrier before he subbed out, and initial prognosis suggests that the Nigerian has suffered a muscular injury.

The 26-year-old has impressed since the start of this season,  having contributed to three goals in his last three games across all competitions, prior to today's contest at Stadio Ciro Vigorito, Benevento.

He has seen his progress hampered by injuries in the last few years, and managed only nine starts in the Italian top-flight over the course of last season.

Joel Obi has contractual obligations with Torino until June 30, 2019.