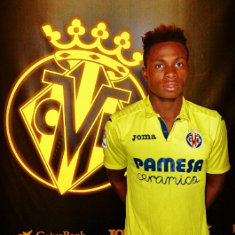 Nigeria U20 international Samuel Chukwueze has confirmed to allnigeriasoccer.com that he has completed his transfer to Spanish La Liga side Villarreal.

The talented winger penned a five-year deal that will keep him at The Yellow Submarine until June 30, 2022 before the close of the summer transfer window.

Chukwueze had attracted interest from several big teams in Europe after helping Nigeria win the 2015 Fifa U17 World Cup.

Arsenal had been favourites to sign Chukwueze but the proposed move collapsed after the Gunners and Diamond Academy could not agree on the payment terms, with the Premier League club insisting that a huge percentage of the transfer fee will be paid in June 2017.

Arsenal would have paid Diamond Academy 2.5 million pounds for the services of Samuel Chukwueze, including performance-related add-ons.

The Gunners had agreed a £1.5 million transfer fee and the Nigerian club would have pocketed £500,000 when he breaks into the first team plus an extra £500,000 when he makes his first appearance for the Super Eagles.

The 18-year-old Chukwueze links up with Jack Ipalibo at Villarreal.