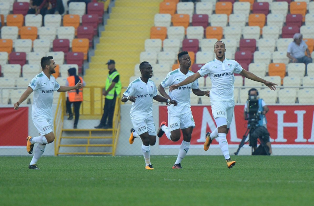 William Troost-Ekong was delighted to net his maiden goal in the colours of Bursaspor in their 4-2 road win over Yeni Malatyaspor on match day five in the Turkish Super Lig on Saturday.

The central defender, making his fifth straight start in the Turkish top-flight, blasted home a loose ball in the 12th minute to open the scoring for his team.

Writing on Twitter, the former Netherlands youth-teamer stated : ''All Glory to God! So happy my first goal for @BursasporSk''.

As a defender for club and country, Troost-Ekong's main job description is to stop the opponents from scoring, but he has added goals to his games in recent seasons.

The 24-year-old has written his name on the score-sheet five times since he netted his first professional goal against Aalesunds FK on March 19, 2016.