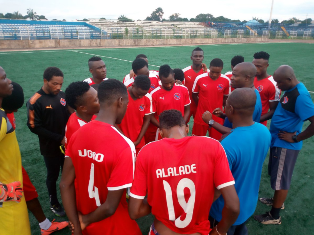 Alloy Chukwuemeka, the team's Director of Football, disclosed this during a management on Monday in Ilorin while speaking with the newsmen.

He said the club will listen to good offers alone and will only allow players to go when the clubs pay for them.

According to finds, top on the list of the players the clubs are asking after include, Wasiu Alalade, Adeshina Gata, Ernest Governor, Samuel Oyedeji, Chinedu Ajanah, Chukwuebuka Anaekwe, Martin Ossy among others.

"We have received offers from various NPFL clubs for a couple of our players.

"We do not intend to stand in the way of any of them, we will allow anyone to go with the right price.

"Where good deal is not reached, we may consider a loan deal" Chukwuemeka said.

The Nigeria Premier Club Owners Scribe, said the Saraki Boys will give the Aiteo Cup a real push as the club will work very hard to win it.

He commended the players for their cooperation throughout the season against all odds.