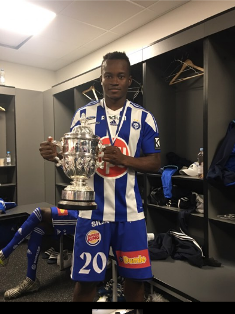 Nigerian midfielder Vincent Onovo lifted his first trophy since moving to Europe as HJK Helsinki beat Seinäjoen Jalkapallokerho 1-0 in the final of the Finnish Suomen Cup on Saturday evening.

Onovo lost three Suomen Cup finals in three consecutive years, two while he was defending the colours of Inter Turku, prior to yesterday's showpiece game at OmaSP Stadion (Seinäjoki).

''I feel great because I have lost the final in 2014, 2015 and 2016.  Now I won the cup in the final, sometimes a game like this is decided by one goal or more goals,'' said Onovo to allnigeriasoccer.com.

Having started three Group C matches and the semifinal showdown versus Ilves, the hardworking midfielder managed only nine minutes in the final against SJK.

Asked to comment on why he dropped to the bench, Onovo replied : ''I think the coach has the right to choose any player that he wants to start''.

Meanwhile, Onovo could bid farewell to HJK Helsinki as early as next month when he comes off contract as he has not yet signed a new deal.