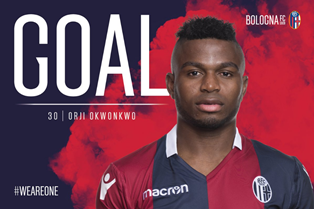 Okonkwo subbed in after 86 minutes and spent only three minutes on the turf before netting the winner for The Red and Blues, aged 19 years, 8 months and 5 days.

The Nigerian record was set by Victor Obinna on September 25, 2005 when he netted against UC Sampdoria while defending the colours of Chievo Verona, aged 18 years and 6 months.

The previous record was held by former Inter Milan wonderkid Obafemi Martins, who scored in his team's 1-1 draw with Atalanta on May 3, 2003 aged 18 years,6 months and 5 days.

Youngest Nigerian Teenagers To Score In The Italian Serie A