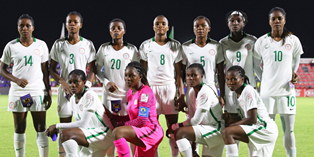 Nigeria's Falconets whitewashed their Tanzanian counterparts 6-0 to zoom to the next round of the 2018 FIFA U20 Women's World Cup qualifiers.

The second leg tie was played in Dar es Salaam on Sunday.

Four goals in the first half and two in the second half were enough to earn the Falconets the massive win.

Rasheedat Ajibade opened the scoring in the 20th minute before making it a brace for herself six minutes later.

Midfielder Folashade Ijamilusi and big striker Anam Imo registered their names on the score sheet as the first half ended 4-0 in favour of Nigeria.

Ijamilusi and substitute Cynthia Aku fetched the two other goals to complete the 6-0 mauling of the Tanzania.


Nigeria had won the first leg in Benin City by 3-0 and completing the task by 6-0 means the Falconets will face Morocco in the next round of the qualifiers.
Abayomi Ademetan
Photo Credit : fifa.com