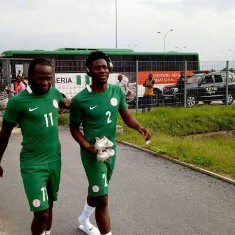 If there's a rollercoaster World Cup story out there, it certainly belongs to the Super Eagles.
From consistent qualification but not many wins to political interference, no one could argue that the Nigerian national team lacks drama.
Nigeria have only missed one tournament (Germany 2006) since their USA '94 debut, consistently topping their tables and in some cases beating their fellow African opponents considerably in qualifying.
This year is no different, with Nigeria sitting at the top of group B with 2 games to play against 2nd placed Zambia and bottom of the table Algeria.
Although both games could be banana skins, Nigeria are way ahead on goal difference and should now be guaranteed a place in Russia next summer with a win against Algeria and a draw against Zambia.
A decent World Cup heritage


Although Nigeria have only gone beyond the group stages three times, there have still been some exciting results and of course big talents who have lit up the world stage. France 1998 was a particular highlight, where the Super Eagles managed to see off both Bulgaria and a strong Spain side featuring a young Raul and Luis Enrique.
Players like Celestine Babayaro was already playing Premier League football for Chelsea and Jay Jay Okocha was Africa's most expensive player following a transfer to Paris Saint Germain.
Despite some big names including Obafemi Martins, Joseph Yobo and Yakubu in the squad at the 2010 World Cup held in South Africa, the team failed to get a win, only managing a draw against South Korea in Durban with goals from Yakubu and Kale Uche.
2014 was equally disappointing, despite a win against Bosnia-Herzegovina and a close 3-2 defeat to finalists Argentina, including a brace from Ahmed Musa.
How is it looking for 2018?


With qualification close, Nigerians can start looking forward to how the team will look when the final groups and game locations are announced over the next couple of months.
The current squad has some very good prospects and established players, with youngsters like Hull's Ola Aina and Leicester's Wilfred Ndidi backing up experienced players like Victor Moses and Ahmed Musa.
One of the most exciting names on the team sheet however is 20 year old Kelechi Iheanacho, who was one of Manchester City's most exciting young strikers before a high profile move to Leicester this summer.
Despite a relatively young squad being likely next summer, the energy and raw skill has helped Nigeria to some high scoring wins in qualifying.
Although they are absolute rank outsiders to win the tournament, there are still some good odds on Nigeria either qualifying or progressing from the group stages over at 888sport.
Shrewd gamblers would be wise to take advantage of good odds before the tournament begins.
Our verdict


There's no doubting that Nigeria have plenty of excellent players in the squad currently, but talent is improving in other teams too.
They have been stumbled a couple of times with draws against Cameroon and Zambia and qualifying and the 2017 African Cup of Nations was a disaster after the team failed to qualify.
It will be interesting to see who makes the cut if Nigeria manage to navigate their remaining games to seal a place in Russia in 2018.
Igho Kingsley
Photo Credit : Instagram.com/VictorMoses