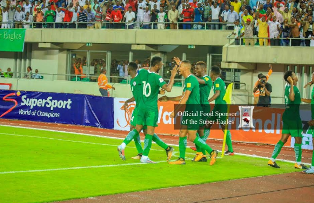 A number of Super Eagles players and coaching staff were sighted at the Akwa Ibom Airport on Sunday afternoon before they jetted out to Lagos and Abuja.

Alex Iwobi, Ola Aina, Leon Balogun, William Troost-Ekong, Ahmed Musa, Abdullahi Shehu and Chidozie Awaziem are confirmed to be on their way or making plans to return to Europe after they flew out of Uyo today.

Before the Dana Air plane left the airport, manager Gernot Rohr reiterated that the Zambians pushed his team all the way, and noted the contribution of Chelsea wing-back Victor Moses and Anorthosis Famagusta midfielder Abdullahi Shehu in the game-winner scored by Alex Iwobi.

'' Zambians gave us a tough match. I am just watching the replay now, we defended well,'' Gernot Rohr told allnigeriasoccer.com.

''Alex Iwobi came on and changed the game, Victor Moses did well to dribble and Shehu's cross went straight to Iwobi who scored.

''I am now relaxed and relieved.''

Three-time African champions Nigeria secured qualification to their third successive World Cup following the win against Zambia, and only Cameroon (in Africa) with seven appearances in total have qualified for the tournament on more occasions than the Super Eagles.