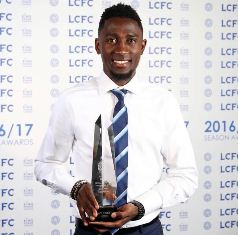 Wilfred Ndidi has dismissed suggestions that he faces one month on the sidelines and doubtful to be in Leicester City's squad to face West Brom at the King Power Stadium next Monday, October 14.

The central midfielder was stretchered out in the closing minutes of Nigeria's 1-0 win over Zambia, having felt some discomfort after taking a shot.

Leicester City medics have assessed the Super Eagles star following his return from international duty and given him the green light to join up with his teammates on Thursday after skipping today's training session.

''Ndidi is fine, he will train with his Leicester City teammates on Thursday,'' a top source told allnigeriasoccer.com.

''He is just tired and some cramp at the end of the Super Eagles match against Zambia. He will be okay.''

In the current season, the Foxes number 25 has been involved in nine matches across all competitions, logging 791 minutes.