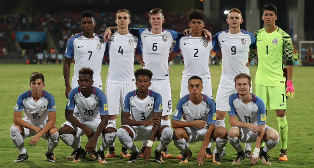 In a disappointing week for the United States, their U17 team wrapped up group play at the 2017 Fifa U17 World Cup with a 3-1 loss to Colombia at the DY Patil Stadium, Navi Mumbai on Thursday evening.

The Detroit-born striker of Nigerian descent Akinola returned to the starting line-up for the Americans, a reward for netting the winner after coming off the bench against Ghana on Monday.

USA found themselves a goal behind early on, Juan Vidal got the South Americans off to a flying start in the third minute.

George Acosta's close range effort in the 24th minute ensured both teams were level at the break.

At the midway point of the second half, it was 2-1 Colombia after Peñaloza's stunning free-kick goal and they doubled their advantage three minutes from time through Caicedo.

In the closing minutes, Akinola, who played the full game, came close to reducing the deficit after linking up with Timothy Weah, but couldn't position himself to shoot before goalkeeper Mier gathered the ball.

Despite the loss, the United States still advanced to the round of sixteen  as one of the best third-place finishers.