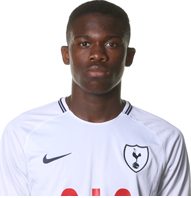 Moroyin Omolabi celebrated his maiden competitive goal in the colours of Tottenham Hotspur as they claimed a 3-1 win over West Ham United in the U18 Premier League on Saturday.

And it was a crucial goal as the Hammers were threatening a comeback after Bernado Rusa netted in the 71st minute to make it 2-1.

A minute later, the talented Nigerian midfielder made the game safe for Spurs when he fired a volley past goalkeeper Ros Harvey.

Prior to Omolabi's strike against West Ham, he had been involved in 20 league games for Spurs U18s and U23 teams spread across two seasons without finding the net.

Primarily a holding midfielder, he can also be asked to operate as a central defender just as he did today against the Hammers.