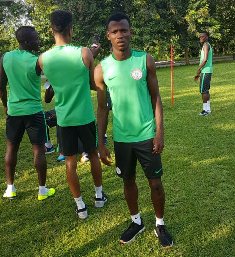 A week after Abdullahi Shehu managed to escape being sent off during Nigeria's World Cup qualifier against Zambia in Uyo, the right back was dismissed in his first competitive game for Anorthosis Famagusta following his return to Cyprus.

Contrary to speculation in the local media, Shehu was not sent off for a dangerous tackle on an Apollon player but for an incident on the bench.

A top source told allnigeriasoccer.com : ''The referee said that Shehu hit someone from the bench of Apollon but we can't confirm it from replays on television. Now he is sure to miss at least two games.''

At the time Shehu was sent off in the 37th minute, Anorthosis Famagusta were losing 1-0; Schildenfeld equalized with 19 minutes left on the clock.

Since the former Kano Pillars star moved to Europe, he has been red carded four times and shown a yellow card sixteen times in 66 matches.

Anorthosis Famagusta lead the way in the Cypriot First Division with 15 points from 7 games.