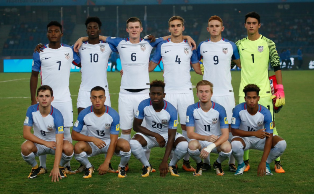 United States have advanced to the quarterfinal of the 2017 FIFA U-17 World Cup following their impressive 5-0 hammering of Paraguay at the Jawaharlal Nehru Stadium, New Delhi on Monday, October 16.

Detroit-born striker of Nigerian descent Ayomide Akinola, wearing the number seven shirt, started for the Americans and was on parade for 79 minutes before he was substituted.

Paris Saint-Germain wonderkid Timothy Weah put USA in front after 19 minutes when he finished off Ayo Akinola's good ball across before he doubled their advantage on 53 minutes.

Andrew Carleton and Josh Sargent scored in the 63rd and 74th minute respectively to give United States a four-goal lead.

Akinola was involved in the build up to Weah's third goal when he carried the ball into the final third, two Paraguayan defenders converged to stop him but the ball slipped through to Carleton, who passed to the number ten.

On Saturday in Goa, USA will meet the winner of Tuesday’s match between England and Japan.