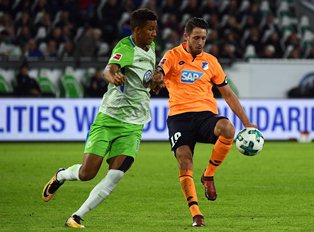 Felix Uduokhai scored his first goal in a Wolfsburg jersey in their 1-1 draw with Hoffenheim in the ninth round of matches in the German Bundesliga on Sunday.

It was a battle of two defenders known to be on the radar of the Nigerian Federation, as former Germany U20 skipper Kevin Akpoguma came up against Uduokhai after his introduction in the 46th minute.

Wolfsburg dominated proceedings in the first half but could not break the deadlock, and missed a glorious opportunity to take the lead early in the second half when Felix Uduokhai cracked the crossbar with a volley.

In the 73rd minute, Hoffenheim's Kerem Demirbay scored from the penalty spot after Marcel Tisserand fouled Benjamin Huebner in the box.

In the first minute of stoppage time, Uduokhai salvaged a draw for Wolfsburg when he headed home a corner kick taken by Daniel Didavi.

Born in Annaberg-Buchholz to a Nigerian father and German mother, the center back has caps for Germany U19 and U20 national teams.