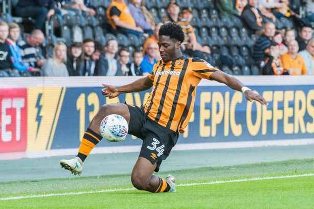 It's been a memorable year so far for Chelsea's Ola Aina who received his first call-up for Nigeria at the beginning of October, whilst impressing fans with his solid performances in the Championship for Hull City this season.

Aina turned 21 years old on October 8 and capped off a breakthrough month by making his debut for Nigeria during their final World Cup Qualifier against Zambia.

The Super Eagles won 1-0 with Alex Iwobi netting a second-half winner, and the defender will be hoping he's done enough to travel with the squad to Russia in June 2018.

The Chelsea defender played the final 11 minutes of the game and helped his side cling onto the slender lead which proved enough to secure qualification for the tournament next summer.

He's currently plying his trade on loan at English second-tier side Hull and has been a regular starter under former Russia coach Leonid Slutsky.

The Humberside outfit were seconds away from securing a rare away victory against Norwich on October 14 but were pegged back in the last minute at Carrow Road.

The Canaries are expected to be promotion contenders this season and returning from East Anglia with a point is not to be sniffed at.

That said, Aina's side will be disappointed that they didn't take all three.

During the 90 minutes, Aina completed eight clearances, made seven interceptions and delivered a couple of crosses during an eye-catching performance.

He's made the Championship team of the week on numerous occasions and put in his best performance to date during his side's 6-1 demolition of Birmingham at the beginning of October.

What's more Aina has been able to operate in a variety of positions across the back four, including centre-half and right wing-back.

Aina was in the running for August's player of the month at Hull City and many Tigers fans are fearful of the possibility that he could be recalled by his parent club Chelsea at any point throughout the season.

He's claimed two assists during his 12 appearances and has played every single minute for the club so far this campaign.

He's proved invaluable to his manager and with the side gathering momentum, Aina will be eyeing up an unexpected playoff push.

Slutsky's side have lost just one of their last five matches in the Championship and haven't conceded more than a single goal in any of those.

As a result of their underwhelming start to the season, they sit 16th in the table, but fans are quietly optimistic that they will continue to climb the division.

They are around 13/2 to make the playoffs this season, with many punters perhaps tempted by a number of free bets and price boosts available from operators such as the bookies offers.

With the side still languishing in the lower reaches of the table, their odds may only get shorter as the season continues.

Aina will be hoping to continue his upward trajectory and his performances have been key to Hull's upturn in form.

On the face of it The Tigers have some winnable games lined up prior to the end of November and it shouldn't be long until they are back in the top half of the Championship table and in touching distance of those coveted play-off places.

Photo Credit : The Lad on the Ball via Twitter