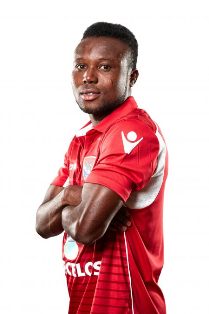 James Igbekeme struck twice for Gil Vicente as they steamrolled over Benfica B 4-0 in the Portuguese Segunda Liga encounter on Saturday afternoon.

The Roosters wasted little time to get going as Jonathan Toro put àlvaro Magalhães's men ahead as early as the sixth minute, profiting from a mistake to score the curtain raiser.

The Nigerian then added a superb second seven minutes later to keep his side coasting away from their hapless visitors who were tactically dire.

Luis Gonçalves added a game-sealing third on the twenty minute mark before the mercurial James compounded the onslaught in the 73rd minute of the second period.

The 22-year-old winger has made ten appearances for his side this season since joining from UD Oliveireinse, with his latest double act tallying his goals to three.

With this win, Gil Vicente move up to sixth on the league table with 17 points after eleven round of games while Benfica B are a place and two points below them in seventh.