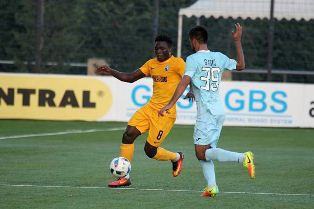 In the tenth round of the Premier League of Azerbaijan, unheralded Nigerian striker Lucky Oseghale was on target as Kapaz defeated Inter Baku PIK 2-0 at Inter Arena on Saturday afternoon.

Oseghale's second half strike took his tally for this season to two goals from ten appearances in the league.

Since joining Kapaz in the summer transfer window, the striker has established himself as a first team regular, starting all their ten matches in the division.

He was discovered by Italian-based Nigerian agent Benny Itorho of Pro-Onesports Intermediaries, and started off his career in Europe with Maltese club St. Andrews FC before shifting to Mosta.

Despite yesterday's win, Kapaz remain bottom of the Premier League table with seven points, one point from the safety zone.

They host Qarabağ in the next round of matches in the division.