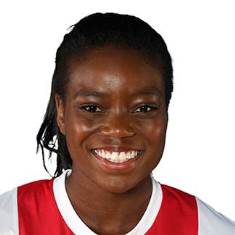 The Nigeria Football Federation have set the ball rolling in their bid to cap Ajax Amsterdam star Toni Payne, ahead of the 2019 FIFA Women's World Cup.

The Birmingham native earlier turned out for United States U15, U17, U20 and U23 National Teams but is willing to switch allegiance to Nigeria and new Super Falcons manager Randy Waldrum has opened a line of communication with the talented striker.

''Randy Waldrum has been in touch with Toni, she is in his plans for the new Falcons team he is building,'' a source close to the player told scorenigeria.com.ng.

The 22-year-old represented the Americans at the FIFA U-17 Women's World Cup Azerbaijan 2012, and was on a target in their 6-0 hammering of Gambia.

This season, Payne has played four matches for Ajax in the Eredivisie Women, and has UEFA Women's Champions League experience under her belt.