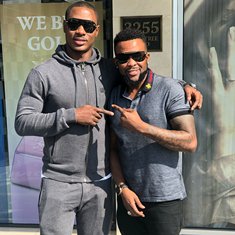 The Nigeria international had been summoned for the international matches against Algeria and Argentina but had to withdraw from the pool after spraining his knee against Chongqing Lifan last weekend.

It is understood that Ighalo is not in America receiving treatment but was forced to start his vacation earlier than planned due to the injury he sustained.

The striker will be out of action for ten to fifteen days.