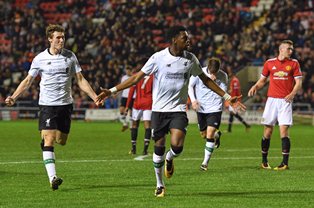 The number ten was joined in the Reds starting line-up by Netherlands youth international of Nigerian descent Bobby Adekanye and they were on the pitch for the entirety of the game.

Liverpool's Matty Virtue restored parity for the home team before the hour mark after Callum Roberts opened the scoring for Newcastle United midway through the first-half.

With seventeen minutes left on the clock, Ejaria put Liverpool 2-1 up with a wonderful effort, collecting Liam Millar's backheel, beating a man and then rounding the goalkeeper to score.

In the 80th minute, Adekanye, who had come close to scoring before Ejaria's winner, almost doubled the Reds advantage but was denied by goalkeeper Nathan Harker.

Liverpool U23s will welcome Everton to Prenton Park in their next competitive fixture after the international break.