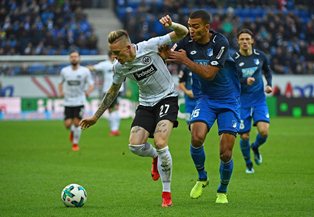 The Germany youth international, who started on the right side of a three-man central defense for Hoffenheim, put through his own net in the sixth minute to give Hamburg the lead.

Former Schalke 04 defender Willi Schulz is the first player credited with an own goal in the German top-flight, and Benjamin Stambouli took the league's tally to 999 in the 4-4 draw with Borussia Dortmund on Saturday afternoon.

Akpoguma has recently broken into the first team of Hoffenheim, starting and going the distance in their last four matches in the league, including today's contest versus Hamburg.

The Neustadt an der Weinstraße born center back played for Rot-Weiß Speyer, Schwarz-Weiß Speyer, FC Bavaria Wörth, FC Neureut 08 and Karlsruher SC before joining Hoffenheim in the summer of 2013.