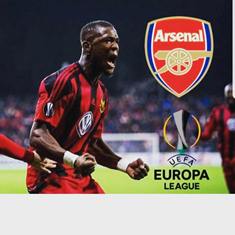 Ostersunds FK's Nigerian star Alhaji Gero has admitted that Arsenal were one of the most difficult opponents his Swedish Allsvenskan team could get in the last 32 of the Europa League following the draw that took place on Monday, December 11.

In a group containing Athletic Bilbao, Zorya Luhansk and Hertha BSC, Ostersunds FK advanced to the knockout phase after finishing second, level on 11 points with the Spanish club.

''Wow, it was absolutely a great draw for us, it's going to be a top and crazy game because we are playing against one of the best teams in the world,'' said Alhaji Gero to allnigeriasoccer.com.

''Alex Iwobi is absolutely a great player and he has been doing an amazing job for the nation.

''Yeah I watch him in the Super Eagles and in Arsenal as well, he is great, really a good player.''

Ostersunds FK will host the Gunners at the Jamtkraft Arena on February 15, while they travel to the English capital for the return leg which will be held at the Emirates Stadium on February 22.

Including the qualifying rounds, Alhaji Gero has eleven appearances under his belt in this season's Europa League, scoring two goals.