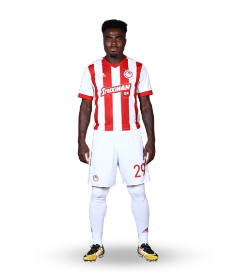 The future of former Nigeria international Emmanuel Emenike is up in the air, less than three weeks before the opening of the winter transfer market.

According to gazzetta.gr, the Olympiakos striker is under orders to train alone even though he is not recovering from any injury.

In all likelihood, Emenike is set to depart the Super League champions in the January transfer window, with CSKA Moscow mentioned as a possible destination.

The striker had complained of being unsafe at his home in Greece and Olympiakos were forced to hire extra security to protect him.

It is thought that Emenike is disgruntled because the Piraeus-based club did not offer him the wages he demanded when he moved from Fenerbahce in the summer, but CSKA Moscow are likely to meet his wage demands if the transfer materializes.

Apart from the aforementioned teams, the 30-year-old has worn the jerseys of Kardemir Karabükspor, West Ham, Spartak Moscow and Al-Ain FC.