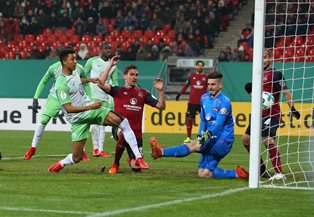 Germany youth-teamer of Nigerian descent Felix Uduokhai scored his third goal of the season as Wolfsburg beat Nunberg 2-0 aet in the third round of the German DFB Pokal on Tuesday evening.

The 20-year old defender opened the scoring in the 96th minute , thrashing in a left footed effort from close range to break the opposition's resistance.

Daniel Didavi doubled Wolfsburg's advantage in the 118th minute to seal the victory and ensure Die Wolfe would have foes to contend with when next the draws for the next rounds.

Young Super Eagles striker Victor Osimhen watched proceedings from the bench for the entirety of the game held at Max-Morlock-Stadion (Nürnberg).

Elsewhere, in England, Jordan Chiedozie got in among the goals for non-league Margate FC side as they toppled Brightlingsea Regent 4-2 in the Isthmian Premier division.

The English-born attacker, whose father represented the Super Eagles, rounded off the scoring in the 84th minute of the game for Margate.