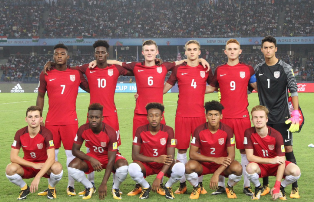 Toronto FC striker of Nigerian parentage Ayo Akinola has been promoted to United States U19 team ahead of the 2018 season, the United States Soccer Federation confirms on its official website.

The 17-year-old is amongst 153 players invited to the first ever U.S. Soccer Men’s YNT Summit Camp, running from Jan. 2-11 in Lakewood Ranch, Florida.

In October, Akinola helped United States U17 team reach the quarterfinals of the FIFA U17 World Cup, where they lost to eventual winners England.

The Detroit native scored the winning goal as the Americans defeated Ghana 1-0 in the group stage of the competition.

After the tournament in India, he was on trial in the Netherlands with Eredivisie powerhouse PSV Eindhoven.

Toronto FC signed Ayo Akinola as a homegrown player in December, and he became the 15th player to sign for the first-team from the Academy.