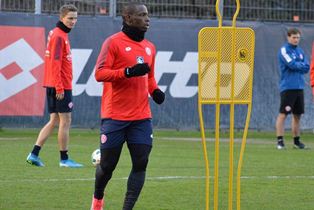 Nigeria international Anthony Ujah has resumed training with Bundesliga club Mainz ahead of the resumption of the second half of the season.

Six and a half years after the striker first joined Mainz from Norwegians Lillestrom, he was among the 25 players (22 outfield players plus three goalkeepers) that took part in the first training session of 2018 at Bruchweg.

Mainz's winter preparation on Tuesday and Wednesday were held behind closed doors.

Austria international Karim Onisiwo, who is still eligible to represent Nigeria, will compete with Ujah for an attacking spot, he is back on the pitch after recovering from a shoulder injury which had kept him on the sidelines for more than three months.

For the remainder of this season, Anthony Ujah will wear the number 20 jersey, the club announced on Wednesday.

As part of their preparations for the trip to Hannover 96 next weekend, Mainz have lined up friendlies against FC St. Gallen and Borussia Mönchengladbach.