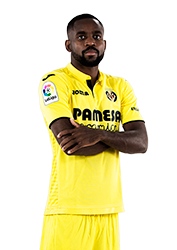 Chinese club Beijing Guoan are on the verge of announcing the signing of Villarreal forward Cédric Bakambu, reports L`Equipe.

According to the French sports newspaper, the 26-year-old  has already passed a medical examination with his new club.

Villarreal will receive a transfer fee of 40 million euros but if tax obligations are included, the Chinese Super League club will end up spending 74 million euros, which will make the Democratic Republic of Congo international the most expensive African player in history.

To date, the most expensive African footballer in history remains Guinea midfielder Nabi Keita, who has agreed to join Liverpool in the summer from RB Leipzig for €56 million.

This season, he has scored 14 goals in 21 matches across all competitions for The Yellow Submarine.