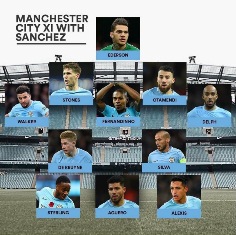 The Chile international has fewer than six months remaining on his current deal with the Gunners and will become a free agent in the summer.

Everyone had expected the Chilean to join the Red Devil's rivals City either in the summer or this January with reports heavily linking him to link up with his former boss Pep Guardiola.

The Premier League leaders, who came close to signing Sanchez on transfer deadline day in August pulled the plug on a £60m deal, as they were unable to secure the £92m signing of Thomas Lemar from Monaco in time, are clear favourites to secure his signature before the end of January, at odds of just 1/2 earlier in December via leading uk free bets on offer betting portals.

Sanchez joining Man City now doesn't seem likely this January as Jose Mourinho may have just thrown a spanner in the works for his long-term adversary.

According to reports, Arsenal are willing to sell the forward this month if a favourable offer comes in and Di Marzio claims that Mourinho may have just stole a match ahead of his rival with the offer of Henrikh Mkhitaryan, as a part of any potential deal.

It's unclear where Sanchez will ply his trade beyond this window, but it's safe to say an exit from Arsenal looks the more likely to happen at the moment.

Mkhitaryan has been linked with Manchester United exit recently, as the Armenian appears to have fallen out of favour with Mourinho and he has also been linked with a move to Serie A Inter and former side Borussia Dortmund.

Manchester City who are leading the race to Premier League with 15 clear points ahead of Manchester United who sits second in the EPL table will be back in action this Sunday when they visit Anfield to take on Liverpool in the Matchday 23 of the Premier League fixtures.

Photo Caption : How Man City could line-up with Sanchez via Facebook