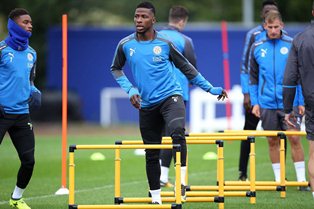 In 2016/17, Leicester City produced by far the worst title defence of any Premier League champion.

Time after time, as Ranieri’s shortlived reign as Leicester manager came to a juddering halt, the pace, power and vigour that characterized the title-winning campaign of 2015/16 simply wasn’t there.

New signings Islam Slimani and Ahmed Musa proved ineffective, and with Jamie Vardy and Shinji Okazaki falling out of form during that time, Leicester approached last summer’s transfer window in dire need of an injection of fresh ideas up front.

Surplus to requirements at Manchester City, young Nigerian striker Kelechi Iheanacho appeared to be the answer to the deposed champions’ prayers.

With Leicester now all but safe from relegation after a poor start to 2017/18, Iheanacho could still be used in a more progressive attacking setup over the coming months, as Puel’s license to safely experiment expands.

Yet, with a World Cup looming and Nigeria in the ‘Group of Death’, Kelechi Iheanacho must now make a decision as to whether he should stick or twist.

As of 9 January 2018, Nigeria are priced by betting site Betway at 9/1 to win their World Cup group, implying that every option must be considered, by Nigeria's head coach Gernot Rohr, by the time his charges open against Croatia at Kaliningrad Stadium on 16 June.

Where Iheanacho’s club career is concerned, time is running out for the Nigerian prodigy to ‘fill out’ as he must to fit in with the physical nature of the English game.

A victim of circumstance

It all began so well for the boy from Imo state. After a series of inspired performances, as Nigeria won the 2013 FIFA U-17 World Cup, the rising star appeared to have the world at his feet.

By all accounts, giants such as Arsenal, FC Porto and Bayern Munich were courting Iheanacho long before he moved to the Manchester City academy in January 2014.

Over the course of his subsequent senior career at City, Iheanacho scored twelve times in forty-six appearances.

Though it was never enough of a return to merit an extended stay on the books at a club like City, a move to Leicester should have upped this rate drastically.

Iheanacho, despite being signed by Craig Shakespeare, was not a major part of the Englishman’s first team plans. Self-preservation over attacking endeavour, in light of the relegation-threatened 2016/17 campaign, was the order of the day.

The arrival of Claude Puel back in October did not change the situation for Iheanacho, and there are also reports that Puel is happy to let him leave Leicester.

As of 9 January 2018,  Iheanacho has been restricted to nine frustrating appearances without any goals – few of which have seen him granted a starting berth.

There are other factors at play which prevent Iheanacho from producing the performances that will get him on a plane to Russia this summer.

Though Iheanacho’s admirers may well bemoan the sour turn his English club career has taken, he is statistically far weaker than his positional rivals.

Accuracy is the most burning issue, and although his chances have been sorely limited, he has a shot accuracy average of exactly zero percent – not one single shot has landed on target in his first nine appearances for the Foxes.

Puel is well known for favouring a game plan built on patient build-up play, which accounts for percentages over the natural instinct that Iheanacho could boast with greater playing experience.

Lacking peak fitness ahead of 2017/18, Iheanacho’s was far from sharp, and this has had a cascade effect on his time with the Foxes.

While Leicester are not without the players capable of launching swift counter-attacks, Iheanacho’s relatively slight frame is also another factor that works against him.

The Premier League now demands a level of physical strength from its central defenders, unrivalled in comparison to Europe's other top leagues.

This is especially true when Leicester require a more drastic, one-dimensional route to goal, and have to rely on an aerial presence, rather than the well-known finishing prowess of Vardy.

Even so, the tall and rangy Iheanacho’s ability to win aerial balls still pales in comparison to his attacking peers at Leicester – again, the lack of opportunity accounts for this.

In light of this, Iheanacho should consider a move abroad with particular zeal, despite being linked to Tottenham and Southampton in recent days.

As of yet, there are no clear leads to clubs in Europe, or even the United States, but Iheanacho has youth on his side if nothing else, and the forgotten Leicester striker must now consider moving on, lest he lose all hope of inclusion in Nigeria's World Cup squad.