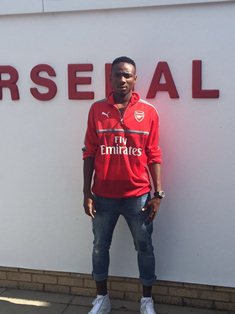 Arsenal are planning to recall Nigeria U20 international Kelechi Nwakali from his loan spell at Dutch club VVV Venlo as a result of his lack of first-team opportunities, according to his brother and representative Allwell Nwakali.

The attacking midfielder, who joined the Limburg-based club on a season-long loan in the summer transfer market, has managed only three starts from a possible 18 this term.

''Arsenal decided to bring him out from VVV Venlo because the coach was busy playing the players that came from relegation with him leaving players like Kelechi and some other loan players on the bench,'' said Allwell Nwakali to allnigeriasoccer.com.

''There's a Real Madrid player (Mink Peeters) that is about to leave the way Kelechi is leaving.

''Arsenal never wanted him to be on the bench because they have their plans for him.''

Portuguese setup Porto are in contact with the Gunners over the possibility of signing Nwakali on loan with an option to buy him at the end of this season.

''FC Porto of Portugal are interested and even wanted an option to buy but they are discussing with Arsenal now. Arsenal are not interested for such opinion because they need Kelechi soon in the main team,'' added Allwell Nwakali.

Kelechi Nwakali, 19, scored on his debut for VVV Venlo in their 1-1 draw vs Groningen back in September 2017.