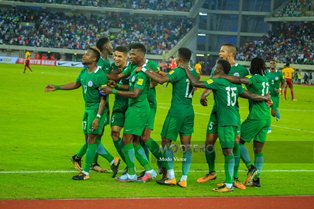 The past week saw a handful of the Super Eagles players put aside their erratic club forms in scintillating fashion and perhaps it is all the pointer to the good tidings to come for the national team, pleasingly in a World Cup year.

The mood around the Super Eagles fold has been buoyant following the excitements of last year, and now, it is one that is primarily billed to be built on: having bested virtually all and sundry since German tactician Gernot Rohr took over the reins, be it African Champions, Cameroon or two-time World Cup winners, Argentina, this team has thoroughly shown they mean business and would likely take some stopping in Russia come June.

At club level, Kelechi Iheanacho, it must be said, had seen his profile at Leicestershire dwindle significantly, no thanks to his experiencing less fortunes to Jamie Vardy and Shinji Okazaki.

His double against Fleetwood Town which inspired Leicester City into the fourth round of the FA Cup last Tuesday, the second of which came with a bit of VAR historic trivia was heartwarmingly one to kick on with.

Well, it is still in the melting pot whether Claude Puel still regards his importance at the King Power as he had enthused albeit after so much speculations in the running window.

Alex Iwobi's prodded effort against Crystal Palace on Saturday snapped a long-standing, worrying goal drought and you could feel the joy and relief the youngster felt when it hit the back of the net — he would only feel much better with more of that.

Urgency and self-push is an indisputable prerequisite of course.

It is trite to wax lyrical about the potentials of Wilfred Ndidi which he had time and again shown in bountiful amounts for the Foxes in the English top-flight and should the bustling starlet replicate any of his tenacity for the national team in five months time at the Eurasian country, then your guess is as good as mine.

Then, Chelsea's Victor Moses continue to be full of both endeavour and now, even end product and if you had watched him run onto Charly Musonda's floated pass against Brighton last weekend, you would always have expected something special even though the goal seemed a bit underappreciated given that the Blues were already home and dry.

Super Eagles dependable defender, Abdullahi Shehu is expected to be unveiled by Turkish giants, Bursaspor any time from now and it is fitting he signed off with Anorthosis Famagusta on a scoring note having skippered them into title contention in the Cypriot First Division.

Legendary status in the far away southern coast of Larnaca intact, perhaps.

At a modest 150/1 odds, Nigeria are not expected in any way to even be breaking the quarter final brass ceiling at the rendezvous in Russia but teams would only underestimate them at their own perils.

Punters can sign up to and bet on the latest betting offers for the team and the players to come off greatly in Russia.

Five-time champions, Brazil and 2014 edition winners, Germany remain top of the betting logs on 5/1 each while France and Spain are just adrift with 6/1 and 7/1 respectively.

There is no gainsaying that Nigeria, primarily as outsiders to win the much coveted title would need to be at their very best to do so but if there latest indulgence for their respective club sides is anything to go by, then the embers of hope for the Nigerian hopefuls has been fanned.