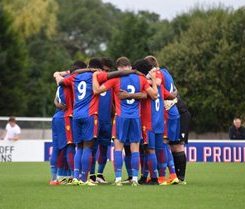 Allnigeriasoccer.com can exclusively report that talented Nigerian striker Josh Ajayi has been offered a scholarship deal by Crystal Palace ahead of the 2018-2019 season.

Ajayi plays primarily as a center forward and he made his U18 debut for the Eagles in that position last season.

In recent weeks, the tall and quick attack-minded player has been converted to a winger and wing-back.

He is in the running to pick up the Youdan Trophy 2017 U16 Fans Goal of the Tournament accolade.