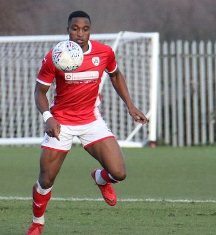 Barnsley U23s claimed a 3-1 win over Leeds United in a Professional Development League 2 encounter staged at Oakwell on Friday afternoon, with former Chelsea trialist Victor Adeboyejo writing his name on the score-sheet twice and providing an assist.

It was a return to winning ways for Paul Harsley's side, who have not won in the league since November 24, 2017.

Adeboyejo slotted the ball past the goalkeeper to give Barnsley the lead in the 30th minute, then the home team doubled their advantage eight minutes later through Wolfe, who dispatched his strike after the Nigerian laid the ball on a plate for him.

Leeds United reduced the deficit when a deflected shot beat Greatorex in the 52nd minute, and a late goal from Adeboyejo prevented the visitors from mounting a comeback.

The Ibadan-born striker has now tallied ten goals in total in the Professional Development League for The Reds this season, though he was away from the club for three weeks undergoing trials with Chelsea.

Dubbed the new Obafemi Martins, he has pledged his international future to Nigeria ahead of England.