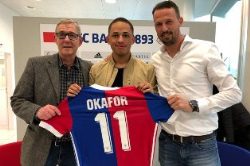 The highly-rated Swiss-born Nigerian midfielder Noah Okafor will have to wait to make his professional debut for Swiss Super League champions FC Basel.

Hours before the close of the January transfer window, FC Basel announced with pride that Okafor had signed his first professional contract with the club, handed the number 11 kit and promoted to the first team.

Basel have written on their official website that Okafor is among four players with the U21 squad at the Marcel Fischer Cup in Allschwil this weekend and as a result he is not eligible to face Lugano on Sunday, starting from 1600 hours.

The attacking midfielder has been the most impressive Nigerian performer in this season's UEFA Youth League, finding the twice and providing four assists from five appearances.

Okafor has been likened to Chelsea star Cesc Fabregas due to his creativity, strong offensive skills and ability to strike the balls from distance.

He has been invited to Switzerland's U15-U18 national teams in the past.