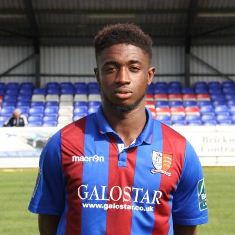 Two Nigerian youngsters were on song for Colchester U23s and Ipswich Town U23s respectively in their 5-2 turnout in their Professional Development League clash on Monday afternoon, with Junior Ogedi-Uzokwe grabbing a brace while Gbenga Folami scored once.

18-year-old Folami pulled Ipswich level with a brilliant effort after they had gone behind to a Decarey Sherrif's penalty in the first period, twisting and turning in the box before sending a sensational finish past Dominic Kurasik.

Ogedi-Uzokwe would continue off from where Sherrif who scored thrice stopped, lifting a cool finish into the roof of the net after the opposition had failed to clear their lines.

He was not done though, as he wowed the spectators at Florence Park with yet another beauty in the closing stages, flicking up the ball to acrobatically bury an overhead kick.

While there was no place in the Colchester team for Olamide Shodipo who joined from Queen Park Rangers during the transfer window, both Folami and Ogedi-Uzokwe were in action for their sides throughout the game.