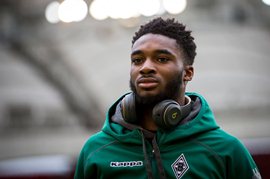 London-born Nigerian right-back Mandela Egbo is inching closer to his debut for Bundesliga side Borussia Mönchengladbach.

Against Borussia Dortmund on Sunday, the Crystal Palace Academy product was included in Borussia Mönchengladbach's match day squad for the third time in four Bundesliga matches but failed to come off the bench.

Egbo was part of the Young Lions squad that won the 2014 European U17 Championship, playing on the same team as Josh Onomah (Tottenham) and Dominic Solanke (Liverpool).

Despite being tipped to break into The Eagles first team like Victor Moses, he penned a four-year deal with Borussia Mönchengladbach a year after the tournament in Malta.

Egbo was considered one of the brightest talents at Crystal Palace Academy, making hie debut for the U18 team at the age of fifteen.

The 20-year-old has not added to his international caps for the Young Lions since he transferred to Germany.