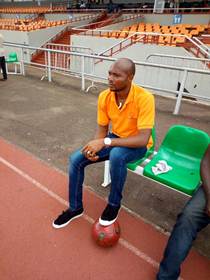 Coach Felix Nwosu has declared himself available to coach in the Nigerian Leagues.

The Somali returnee,where he had a brief stint with Heegan FC , who is currently tutoring a non-league side in Enugu is willing to join any NPFL or NNL clubs but the club must be willing to meet his demands.

The coach debunks claims making the rounds that he is willing to work for free just to prove his mettle and describe such insinuations as a huge joke.

In Nwosu's words, he said he's not available for free as he has bills to pay.

The young Nigerian coach warns that nobody should joke with his salary and declare that his agent will make further clarifications on such comments.

''Don't make joke with my fees. My agent will respond on that,'' the coach stated.

In a swift response ,the fearless intermediary Eddie Ogbemudia refuted unverified claims that his client is willing to work for free and get paid after he delivers on his promises.

''That's not true...let's not make proposals that are non existent,'' fired Ogbemudia.

Felix Nwosu popularly known as Abacha in his playing days represented clubs both in Nigeria and Kenya, including Rangers International and Gor Mahia FC .

He then went on to bag KNVB Netherlands, Swedish TikiTaka, TheFA, Kenya Institute of sports education and CAF coaching qualifications.