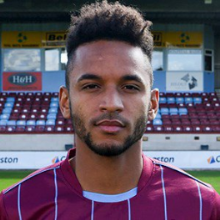 After twenty four hours of voting, Scunthorpe United have informed via social media that Ojo has won the Goal of the Month award for February.

The 26-year-old received the ball in his own half of the field, sprinted towards goal before taking one of his trademark shots from outside the box in the 31st minute against Northampton Town.

His right-footed shot was his second goal in the league this season for Scunthorpe United, having opened his account against Wigan Athletic in October 2017.

Born in Antwerp, Belgium, Ojo was capped by Belgium at U15, U16, U17, U20 and U21 levels but is still eligible to represent the Nigeria national team.

He represented VVV-Venlo, Beerschot AC, Royal Antwerp, FC Dordrecht and Willem II in the past.