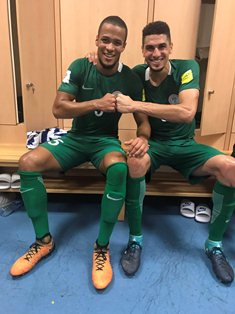 Super Eagles star Leon Balogun was not able to confirm one hundred percent if he'll be on the books of Bundesliga club Mainz next season, saying his future will be decided before Russia tackle Saudi Arabia at the 2018 World Cup on June 14.

If the central defender does not renew his Mainz vows at the end of the season, it means he would walk away from his sixth club in Germany without attracting a transfer fee.

''No, I want to have clarity in any case first. I'm going to be 30 years old in summer, so it would be presumptuous not to clarify my future before the tournament,'' Balogun told T Online.

''I am already in talks with those responsible here in Mainz and can definitely imagine staying.''

Though Balogun has gone the distance in the last three games in the German top-flight, he has managed only ten appearances in the league from a possible 24 this term due to uncertainty about his future coupled with injuries.