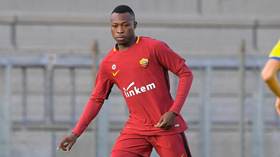 Nigerian right back Nura Abdullahi faces at least one month on the sidelines due to heart problems, the defender's parent club Roma have officially informed.

Abdullahi, who has been loaned to Serie B outfit Perugia until the end of next season, has been ordered to take a rest by club medics for precautionary purposes and further tests will be conducted next month.

''On Wednesday 28 February, full-back Nura Abdullahi underwent scheduled cardiological tests. The results of the tests made it necessary that the player stop all sporting activity for a period of 30 days,'' Roma stated.

''Following the completion of that period of rest, the player will undergo further tests.''

The 20-year-old had a heart operation three years ago when problems arose during a fitness test.

Abdullahi had been involved in 3 games for Perugia in the Italian second-tier before returning to the treatment room, and was included in Roma's match day squad for Serie A games on four occasions this season.