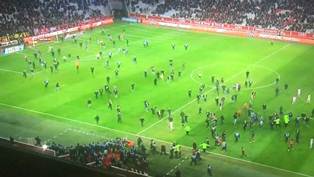 Former Nigeria international Vincent Enyeama escaped being attacked by Lille supporters in the wake of their 1-1 draw with Montpellier in the French Ligue 1 on Saturday evening.

The goalkeeper was presumably not with the team for the game at Stade Pierre-Mauroy (Villeneuve d'Ascq) as he was not named to Lille's provisional squad.

About a hundred Lille fans ran to the field and went to the players of their team after the final whistle, they began to insult the players and threatened them because of the bad results of the team this season.

One of the fans hit Lille striker Nicolas Pepe in the leg, defender Adam Sumarao was also struck and the president of the club Gerard Lopez was insulted.

Reacting to the incident, Enyeama posted on social media : ''How did we get here.the last time losc had fans on the pitch was for celebration.the real fan/supporter will always stay behind the team no matter what.good or bad times.tousensemble#onestlelosc#ilfautpasoublie.''

After 29 rounds of matches in the French Ligue 1, Lille are sitting second bottom with 28 points.