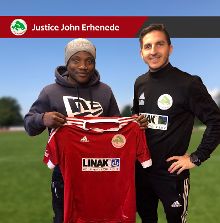 The FC Ebedei product had been searching for a new employer since his departure from Kolding IF in July 2016.

In his first words as a Sønderborg player, Erhenede said to the official website of the fourth-tier club : ''I'm really happy to get back and have been taken really well by the club and the team.

''I am motivated and look forward to becoming part of the team and especially Sønderborg. I hope to help lift FC Sønderborg to the next level. "

Head coach Gunnar Guillermo Nielsen added : ''Justice can contribute a lot on and off the track with his experience from former top clubs, in addition he is a fresh breath socially.

''I have previously played with him and what qualities he possesses. The plan is that we physically build him over the next few weeks, after which he can add the experience and quality of the squad. I look forward to working with Justice.''