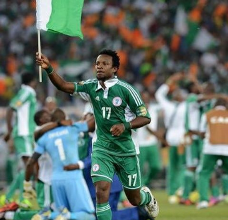 Allnigeriasoccer.com can exclusively report that two Premier League clubs were interested in the international friendly between Nigeria and Serbia at the Hive Stadium.

Representatives from Newcastle United and West Ham were physically sighted in the stands running the rule over the top stars on both teams.

Steve Nickson, the Newcastle United head of recruitment, was in Canons Park, but he could have been watching Magpies striker Aleksandar Mitrović, who is spending the rest of the season on loan at Fulham.

Having said that, this website can reveal that Super Eagles captain on the night Eddy Onazi has been linked with a move to St James' Park in the past.

West Ham United manager David Moyes revealed last week that he will spend part of the international break to scout for players, and the Scot was among the 3,500 spectators at the Hive Stadium.

Chelsea wing-back Victor Moses, who played only the first half, spent the entirety of the 2015-2016 season on loan at the Hammers.