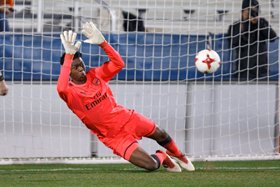 Arsenal have set up a meeting with Liga MX side Tigres in the final of the oldest and most prestigious international youth soccer tournament in the United States, Dallas Cup, after beating Manchester United on penalties this morning.

The Gunners U19s enjoyed a 3-2 success in the shootout after the two teams were tied 2-2 at the end of regulation and extra time.

Goalkeeper Arthur Okonkwo, defenders Joseph Olowu and Tobi Omole, and striker Folarin Balogun all started for the London team while no player of Nigerian descent traveled with the United squad to America.

The Red Devils led 2-0 at the break thanks to goals from Largie Ramazani and James Garner but a brace from substitute Bukayo Saka in the second half cancelled out both strikes.

The Nigerian winger reduced the deficit in the 46th minute before producing the equalizer on 61 minutes.

In the penalty shootout, Okonkwo saved United's second and fifth kick taken by Garner and Galbraith respectively while Saka converted Arsenal's last kick of the game.

Kwame Ampadu's boys will face Tigres at the Toyota Stadium in Frisco on Sunday, starting from 1500 hours local time.