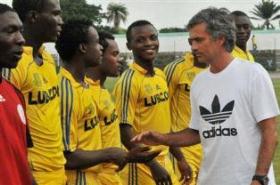 Former Dream Team VI invitee Samuel Monday Ayinoko was on target on his league debut for newly promoted Swedish Superettan side Landskrona BoIS in their 3-2 loss to Falkenberg on Sunday.

Söderström opened the scoring for the visitors in the first minute of first-half stoppage time and Landskrona BoIS had to wait until the 63rd minute before Samuel netted the equalizer.

Karlsson and Pärsson scored to give Falkenberg a 3-1 lead but Sadat reduced the deficit on 87 minutes.

Manchester United coach Jose Mourinho personally scouted Samuel Monday Ayinoko (see photo) while he was representing Kwara Football Academy and recommended him to Benfica, who signed the player in the 2011-12 season.

The 24-year-old has worn the jerseys of Swedish clubs ängelholms FF, östersunds FK and Helsingborgs IF since he ended his association with Benfica.